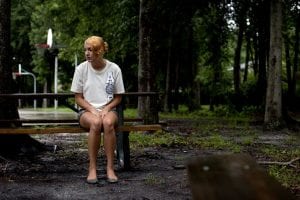 Earlier this year, Governor David Ige and Mayor Kirk Caldwell declared a state of emergency as they have been addressing the Hawai’i homeless problem. The problem is ever growing and it is worsening every day. Given the high cost of living, limited land and community housing, low wage paying jobs, the number of homeless individuals and families is on the rise. Children and families are living under tarps, in tents, in cars, under bridges, and in parks with nowhere to go. Homelessness is prevalent on all of the IslandsThere are an estimated 487 homeless in Hawai’i per 100,000 people— the highest rate per capita followed by New York and Nevada according to federal statistics.  The correlation between trafficking and homelessness hasn’t received as much attention recently in the media and I would like to highlight the risk that youth face. Being homeless, significantly increases the vulnerability for children to be recruited, conned, and exploited through sex trafficking. Whether being homeless as a family or as an individual homeless/runaway youth —–survival can lead to desperate measures resulting in victimization.

Youth who end up homeless, may be running away to escape physical and sexual abuse and sadly, others have been ordered out of the home by parents who reject them or cannot afford to take care of them. Often disconnected from family and friends, homeless kids are particularly susceptible to traffickers who lure them with the promise of food, warmth, “safety and security” and false love. Once snatched from the streets without anyone noticing, they are sold for the highest price, their dignity and sense of self destroyed. Many factors contribute to the overall number of homeless youth each year, but common reasons are family dysfunction or crisis, exiting the child welfare or juvenile justice systems, and sexual abuse.

The following statistics are mind blowing and put into perspective the scope of the issue facing our state and our country.

These young people often flee abuse and violence at home, but are exposed to further sexual victimization and human trafficking once on the street.

Both locally and nationally, we are facing a growing population of homeless youth who are readily being victimized through commercial sexual exploitation. Housing for homeless families and youth is a growing concern. Homeless youth who have been victimized and sexually exploited suffer from horrible traumas. Often this requires a tailored and intensive intervention with ideal placement being a longer term residential program. Given the complex needs of this population of children, managing and meeting the needs can be difficult for short term placements especially when there is not a home to return to.  Sometimes these children enter into the social and juvenile justice systems and these agencies are struggling to find services and referral resources specifically related to the trafficked child and especially services providing residential care and intervention. When children do not receive comprehensive services, they have a tendency to return back to the streets, back to the arms of those who exploit them. Research has proven that this population of children requires a comprehensive setting of care to begin to heal from their trauma.  If we do not provide rehabilitative residential care, we are contributing to further victimization of this population of children and we are also increasing the burden on society to care for these children who when they become adults may remain within the cycle of abuse, violence and homelessness of which costs our communities millions of dollars. The greater issue is that the innocence of these children is being stolen and they need hope for the future, opportunity for life changes, and a chance to dream again.

We continue to press forward to make Pearl Haven a reality for youth.