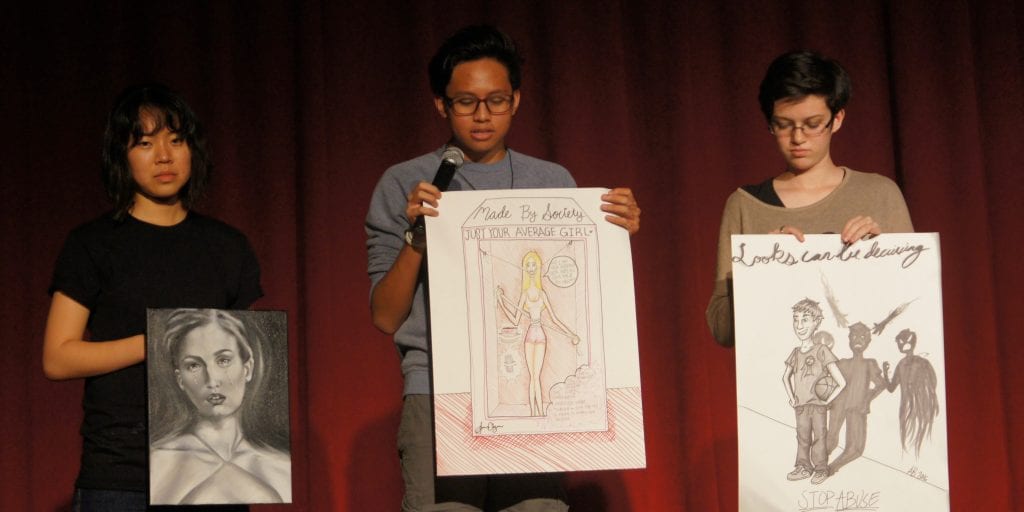 The students invited and raised funds for three local anti-human trafficking organizations—Made In Hope, Ho’ola Na Pua, and IMUA Alliance. The funds were raised from the entrance fee, art auction, and bake sale. Over 200 people attended.

The night started off with a Slam Poetry from Anna Davide. Through her words, Anna powerfully illustrated the story of her friend who was victimized by sex trafficking. After Davide, Kris Coffield from IMUA Alliance shared about his advocacy for anti-human trafficking. He said, “A common myth is that sex trafficking cannot be stopped. This is not true. The bill that just passed through congress proves that sex slavery can end, from sea to shining sea.” After Kris’ speech, two students shared their beautiful violin and piano talents to the audience.

During intermission, attendees were encouraged to approach the different organizations’ tables to learn more about trafficking on our island. After intermission, Ho’ola Na Pua’s Smart Courage Coordinator Kaleo Schneider talked about education and prevention. Kaleo said, “Prevention works. We’d like to see the Board of Education implement exploitation prevention in the classroom. This is important because the average age of a child who enters sex trafficking is just thirteen years old.” The audience saw the reality of this statistic when Made in Hope representative and former sex trafficking victim Mary Nelson shared her own personal story of exploitation. Mary was trafficked at the age of fourteen in New York City. Today, she is a survivor and works with Made In Hope to tell her story and encourage young people toward action.

During the second intermission, many more students approached the organization tables, asking questions and taking brochures. Some students even signed up to become volunteers, while, another student played his guitar and sang on stage. Afterward, Jeanne Kapela, also known as Ms. Hawaii, captured the entire audience with her moving speech on making a difference. Jeanne shared, “The one thing that I learned this year is that this crown means nothing. This crown that I starved for, took three years to run for, did everything for, means nothing. It’s what goes into it that means everything. The most important thing that I learned in my career is what I can do for someone else. There are people out there that can’t be you. They don’t have the opportunity to shine because someone else has decided to stifle them by selling them, making them a slave. Go out there and talk about sex trafficking. Use the knowledge that you learned tonight to make a difference. Because how dare you not use what you learned to help someone else. Remember that education ends exploitation. And together hashtag, sex trafficking ends with us.”

Mililani High School’s National Honor Society did an incredible job of putting this event together. NHS student and Event Coordinator Kaycee Beardeaux made a strong effort to bring Ho’ola Na Pua on board. The actions that the younger generation take today, will make a lasting impact on tomorrow.