Meet Jody Allione, one of our most active volunteers and this month’s Volunteer Spotlight.

Over the past year, Hoʻōla Nā Pua has gained incredible momentum, obtaining nonprofit status, pulling off a fantastic inaugural gala, and launching a capital campaign to support the mission of building a home for victims of sex trafficking. For board chairperson Jody Allione, however, the moments that stand out are not the headline successes, but the day to day victories that make Hoʻōla Nā Pua’s work possible.

“It’s the little miracles,” Jody says, “Often times it just feels like you’re up against a wall, and then you meet someone who has the answer or something provides a breakthrough. That kind of thing gets me going. I see the mountains and I see the hurdles—even people working against us—and yet every single day, we get a breakthrough, it seems. Those small things really convince me that we’re doing the right thing.”

This journey of small miracles began four years ago, before Jody had ever heard of trafficking. She recalls, “I did a project that finds your life mission. I thought I knew my life mission, but I still always did this exercise. At the end, the sentence I wrote was, ‘To provide a place of refuge.’ I thought I got the wrong sentence!” 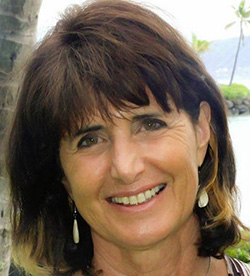 Soon after, however, Jody found herself at a social justice conference in Australia. Although she left convicted of the need to take action, it was not until she met Jessica Munoz that things began to click. She discovered that Jessica and others were seeking a location to build a home for girls rescued from trafficking. Consequently, Jody’s background in site development made her a perfect fit for the organization that has become Hoʻōla Nā Pua.

Over the past few years, Jody has been crucial in finding and obtaining Hoʻōla Nā Pua’s current site. Her work includes overseeing permit and licensing applications, coordinating architects, engineers, and contractors, and managing community outreach. In addition, she plays a key role in organization and strategic marketing by recruiting top level volunteers, networking, and writing grants.

Oddly enough, when asked to describe the hardest part of volunteering, Jody points not to her endless list of managerial duties, but to the vulnerable task of asking people for money. She observes that although many sympathize with the significance of Hoʻōla Nā Pua’s mission, putting one’s money where one’s heart is takes another level of commitment that many are unwilling to make.

Nevertheless, the wholehearted commitment that characterizes many of Hoʻōla Nā Pua’s volunteers has fostered a close knit ohana among the core team. In this rewarding community, Jody is able to make the most of her knack for creative problem solving; the $1000 from 1000 campaign is one of her brainchildren. Likewise, she urges new volunteers to bring their strengths to the table, since the organization has opportunities in almost every area that people work.

For Jody, this experience with Hoʻōla Nā Pua has transformed her previous dislike for volunteering into a passion for the work that she does. In fact, she goes so far as to say that her duties are not work, but rather, her mission. Although that mission took time to discover, she looks upon the journey with thankfulness, reflecting on how all of her life experiences have been preparing her to provide this place of refuge for victims of sex trafficking.

Despite all the hats that she wears, Jody is quick to point out that this is not a one man show, but instead, a collaborative effort. As Hoʻōla Nā Pua progresses toward the opening of this new home, each volunteer’s contributions—those little miracles that slowly break down barriers—are indispensable towards the success of this place of healing.