As Hoʻōla Nā Pua’s Community Outreach Coordinator, Tammy Bitanga is acutely aware of how deeply a locale’s social fabric affects the health of its individuals.

In carrying out her responsibilities, she coordinates volunteers and finds places for Hoʻōla Nā Pua to raise awareness. Although this often involves fundraisers, Tammy points out that her job is not measured in money collected, but in awareness raised, listing networking and educating the public as the favored aspects of her position. 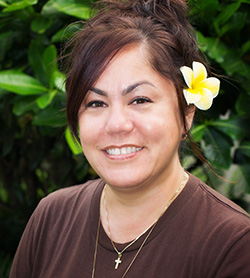 Specifically, Tammy says, “Recently, I attended a training for 80 Honolulu Police Department officers. It was empowering to be able to stand in front of them and tell them how they could help the girls, so that they are a safety, not an enemy.”

Nevertheless, she says, “This is not a law enforcement problem; this is a community problem, and it’s going to take a community to solve it.” Consequently, Tammy is deeply invested in creating the means by which Hawaii’s community can create a nurturing environment for victims of trafficking. As a former victim of exploitation, she understands how much of an impact a caring community—or the lack thereof—can have on an individual’s recovery process. She says, “There wasn’t any specific care therapy for me, so my self image suffered. I settled for who I thought I was—a girl who was cheap. Because of that mindset, I chose to have unhealthy relationships.”

Speaking of her own journey, Tammy emphasizes the subsequent love extended by a church family as being a significant impetus towards healing; likewise she looks forward to a place where girls can receive specific and adequate therapeutic care, in order to break their downward spiral.

For Tammy, instead of a downward spiral, life has become an upward cycle of service. She says, “I never really realized how far I really have come until the last few years. I was just in survival mode, but over the last few years, I’ve come to realize that in spite of all of the hard times, difficulties, and not having the best cards dealt to me, I’ve actually done okay. They only way that I can truly embrace that is by knowing that God allows me to go through what I’ve gone through, but never left me. He has restored my life to where I could go back and help others.”

In light of this, Tammy urges potential volunteers to operate in their passions, since everyone has something to offer, even if it is just picking up the phone and telling someone about the problem. This is, after all, our community, and it is only through our collective efforts that social problems will see justice.